Which login should I choose?

What Others Are Saying About PandaTree 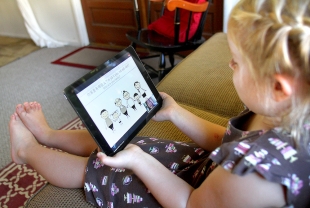 Kristina Klausen was looking for a way that her two daughters could get extra practice conversing in Mandarin outside of Ohlone Elementary School's Mandarin immersion program, in which they were enrolled in. Klausen herself doesn't speak any Mandarin, and though her children's father is of Chinese heritage, he doesn't speak much either.

Kristina Klausen was looking for a way that her two daughters could get extra practice conversing in Mandarin outside of Ohlone Elementary School's Mandarin immersion program, in which they were enrolled in. Klausen herself doesn't speak any Mandarin, and though her children's father is of Chinese heritage, he doesn't speak much either.

So naturally, she turned to the Internet. She found a woman in Beijing willing to tutor her children via Skype. The woman had tutoring experience and was interested in moving to the United States, but other than that the arrangement was "completely random," Klausen said.

For about a year, the woman and Klausen's two daughters, then 8 and 11, chatted on Skype, first for 30 minutes once a week and later twice a week.

"I realized, wow, I was lucky to stumble into this, but other parents are looking for the same thing," said the Palo Alto mother and former senior employee at eBay. "I'm always getting together with the other Ohlone parents, and we're always comparing notes on how we help our kids."

So, in the Palo Alto way, Klausen launched a startup to connect local Mandarin students one-on-one with native speakers -- all via Skype. The focus is narrower compared to the range of in- and after-school private immersion programs in Palo Alto -- learning through conversation rather than textbooks or in an academic environment.

PandaTree is one mother's entrepreneurial reaction to wider parental interest in either enhancing or filling the gaps left by the Palo Alto school district's language-immersion programs. Many students in the Ohlone program are non-heritage speakers, like Klausen's daughters, so they are not exposed to the language at home or outside of the classroom unless their parents choose to enroll them in after-school programs or weekend Mandarin classes, of which there are many in Palo Alto.

Other children stop acquiring the language once they graduate from Ohlone and reach middle school, where until this fall no Mandarin class has been offered.

In February, the district's Board of Education approved a pilot Mandarin program for Jordan Middle School, which is launching this fall with a cohort of sixth-graders who will receive Mandarin instruction for one hour a day, four days a week.

Klausen said she tried supporting her daughters' Mandarin education through after-school programs, travel to Beijing and even a summer camp in south China. Her older daughter entered Ohlone as a first-grader in 2008, as part of the inaugural Mandarin-immersion class. She previously attended preschool at Pacific Rim International School, a Montessori school in San Mateo that teaches in English, Mandarin and Japanese, and Duveneck Elementary School for kindergarten.

"We've tried all of those, and it's great. To me, the more language learning you can do, the better, but there was something about the convenience of being able to do it at home at the time it's convenient for you," she said of the tutoring.

After running into trouble with China's stringent Internet restrictions when trying to set up connections with tutors in China, Klausen starting looking for native speakers in the U.S. She has since hired 12 tutors who range from foreign-language teachers with master's degrees in teaching to a woman from Hangzhou, the capital of China's Zhejiang province, who has a master's degree in economics and a bachelor's in Italian language and literature. (There is only one non-native tutor, a graduate of Cornell University who lived in China for some time. He was tested by the American Council on The Teaching of Foreign Language and has other certifications, Klausen said.)

PandaTree's tutors are vetted by company staff, teachers and students. The first step is a resume screen, and then a Skype interview with Klausen or one of her managers. They look not only for high-level qualifications but also a good online presence -- "being able to just connect and have that warmth come through on the Internet is really important for us," Klausen said.

PandaTree then sets up three half-hour tutoring sessions with a volunteer "tutor tester," many of whom are students in the Ohlone program. Afterward, the student fills out a survey about the prospective tutor, and professional Mandarin teachers review the recorded sessions.

Klausen emphasizes that the PandaTree experience is supposed to be fun, casual and engaging. The focus is on boosting conversation skills rather than academic achievement. The tutors do not assign homework or evaluate the students, and they are not following any curriculum.

Each 25- or 50-minute session is tailored to the interests and ability of the student, often starting with the tutor and student talking about what's going on in their lives. The session is also shaped around topics of interest to the student, such as pop culture, music, professional sports and current events. They might also play a game to review vocabulary words, do a skit, perform a tongue twister or poem, have a debate, watch a cultural video or look at photos together.

Klausen said she hasn't heard any concerns from parents about kids learning via the computer rather than in person. She anticipates parents having questions about educational value of the casual, conversational sessions, however. Under an FAQ section on the company's website is the question, "If my child is just having a conversation, how will I know they are learning?"

"We're all about giving kids a chance to practice using the language in a way that really stokes their appetite to learn more," the PandaTree website states. "If it's grammar drills you're after, there are other better services for you. If you want to help your child gain lifelong language speaking skills, you're in the right place."

However, after every session PandaTree does send parents an email explaining what topics were discussed and a list of new words learned. The email is "partially automated," Klausen said, drawing from a log of the content sets that the tutors use. Video recordings of the sessions are also made available to parents.

Ivy Li is one mother who jumped at the idea of PandaTree for her daughter, who has participated as a tutor tester for PandaTree since February. Li's daughter will be entering her last year in the Ohlone program this fall.

Li, who grew up in Beijing, said she speaks English about half of the time and Mandarin the other half at home, but her daughters mostly respond in English. Li's parents live with them and only speak Chinese with her daughters, she said.

"Still, predominantly, their language is English," Li said. "I felt like if there were natural ways to help them maintain (Mandarin) ... that would be great."

She said felt like the after-school and weekend Mandarin programs in the area were not a good fit for her daughter, who lived for several years in Beijing. But through PandaTree tutoring sessions, her daughter can talk about topics related to her life, from horseback-riding to food to cats. Describing PandaTree as relaxed and intuitive, Li said her daughter is much more receptive to speaking Mandarin with her tutor than with her mother or in a more academically focused classroom environment.

Lucy Lee's 8- and 10-year-old sons also started out with PandaTree this year as tutor testers (one has a class with one of Klausen's daughters), but had such a great experience that they're now enrolled in regular summer tutor sessions. She said she's noticed her sons are skilled at reading or understanding what others say in Mandarin, but struggle with conversing and coming up with phrases on their own.

"This is likely related to the fact that we don't speak Mandarin at home, and I imagine we're not alone in this challenge in the MI program," Lee said. "In the past, we have encouraged them to converse with others in Mandarin when they have a chance, but those opportunities are pretty inconsistent and infrequent."

She said many other Ohlone parents supplement classroom immersion with additional classes, not only in Mandarin but in math, reading and writing, but she and her husband are reluctant to put any additional academic burden on her children at such a young age. PandaTree, though, is flexible, low-pressure and "a great way for us to squeeze in a fun Mandarin activity without worrying about weekly commitments, homework, and shuttling around town," she said.

PandaTree charges $25 for a 25-minute session and $45 for 50 minutes. Packages are available with more classes at a discounted price.

PandaTree also offers its own immersion program, typically for students who don't speak any or much Mandarin. It's six weeks long with three weekly half-hour sessions with an online tutor. In the immersion program, the tutors follow a world language curriculum whose content PandaTree licensed called "Real Language -- Right Away!" which is described on its website as a "communicative approach for beginner language students."

Klausen said she plans to soon expand PandaTree's offerings to include French and Spanish.

What Our Customers are Saying

The teachers are very nice. They help me learn lots of new words and they send me cool Panda videos!

We've been using PandaTree for a little over a month and I'm hugely impressed with it. My son has had two tutors and liked them both a lot. As a parent, I like that I can watch the recorded sessions afterwards to see what he learned. Also, since PandaTree is US-based, there are no time-zone issues. I did a lot of research before finding PandaTree, and now I'm telling everyone about it.

I really like that my child gets to practice her foreign language skills from the convenience of our home with no time spent commuting! It’s great that there is a variety of tutors to choose from as well as information about the tutor’s background. The website is user-friendly and my child loves to collect the cute pandas after each session!

My daughter had frequent PandaTree sessions this summer to help prep her for Mandarin 3 in high school. She had a great experience. Her tutor developed personalized plans and the sessions were exceptionally well organized. She wants to enroll again!